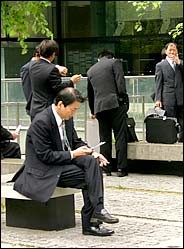 
Is a Salaryman Without a Suit Like Sushi Without the Rice?
By JAMES BROOKE   May 20, 2005

TOKYO, May 19 - The fashion models who prowl the catwalks of Japan tend to be long-legged and slinky. But the latest style setter here has a leonine glare and the kind of commanding bark that makes junior executives sit up and take notice.

Hiroshi Okuda, chairman of Toyota Motor, Japan's largest company, is about to make his runway debut, promenading before the cameras for a new national campaign to cajole Japanese men to help the nation save energy by shedding their jackets and ties in summer.

This blatant appeal to hierarchy comes as Japan - the world's second-largest oil importer, after the United States - charts a sartorial revolution intended to cut summer air-conditioning bills. The dark business suit, the beloved uniform for generations of salarymen, is supposed to stay at home this summer. All public and private offices - in a bid to save energy and reduce output of global warming gases - are to set their air-conditioners at 28 degrees centigrade, or a sweltering 82.4 degrees Fahrenheit.

"Japanese often feel they cannot do this or that if their bosses are not doing it," said Yoshihisa Fujita, the environment ministry official in charge of the campaign. "We targeted top executives of major corporations to lead the movement because smaller company employees would feel, 'We cannot remove neckties when our customer, company people, wear them.' "

Until now, office air-conditioning settings have varied, with some women complaining of glacial temperatures that allow their male colleagues' suits to look crisp. Next Tuesday, a rules committee of the lower house of Parliament is expected to vote to allow members to doff their coats in offices and committee rooms, a throwback to the 1950's, before air-conditioning. 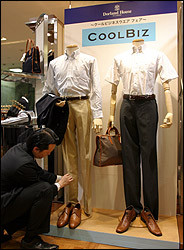 "This summer I will not allow anybody with tie or jacket into my office," the environment minister, Yuriko Koike, told ministry employees on April 1, well in advance of the June 1 unofficial start of the air-conditioning season. In a press conference, she said that Cool Biz, a vaguely American fashion label pronounced "kuuru bizu," had been chosen among 3,200 suggestions submitted for Japan's new casual summer look.

Some Japanese men sniff a plot by the nation's apparel industry to copy the boom enjoyed by American men's clothing stores a decade ago, when Casual Fridays forced office workers to augment their wardrobes with pressed khakis and nice sports shirts.

"We welcome the Cool Biz move; it is a favorable wind for us," Masaaki Kato, spokesman for Renown D'urban Holdings, one of Japan's largest apparel companies, said in an interview. "The fence between business and casual has been crumbling recently. There is a decline in the traditional view that the man who is wearing a suit is a businessman and the man who's not is unemployed."

The catchy Cool Biz name is essential because many Japanese cringe at memories of a fashion crime committed by a prime minister after the 1970's oil shock. Called the "energy saving" look, this short-lived suit featured jacket sleeves cut off above the elbows. This hybrid salaryman safari suit bombed.

Prime Minister Junichiro Koizumi unveiled the casual summer look in April, pitching it as part of Japan's effort to meet its 2012 goal of cutting its emissions of greenhouse gases by 6 percent from 1990's levels.

"The government will take the lead in prevention of global warming," he said. "From this summer, government is planning to start no necktie, no jacket."

Japan is the birthplace of the Kyoto Protocol, which only adds to the popularity of the global warming pact here. In an Asahi newspaper telephone poll last November, 79 percent of respondents said they believed that global warming was their "own problem."

Last month, Mr. Koizumi's entire cabinet approved casual business dress guidelines, a first for Japan. The policy calls on government officials "during June through the end of September, to work with light clothes with moderation that would not deviate from social norm, except for unavoidable situations brought about by diplomatic protocol, etc."

Bureaucrats mortified by informality can wear pins blaming their casual look on the national drive to meet Kyoto targets: "28 degrees/we are in the summer casual dress campaign to achieve minus 6 percent."

But salarymen are not expected to surrender their dark suits without a fight. On a recent afternoon in Otemachi, Tokyo's financial district, men on their lunch breaks predicted little loosening of one of the world's most conservative dress codes.

"The main obstacle is outside the company," said Seiichiro Yabui, a 36-year-old salesman. "How you appear when you meet clients, especially old clients."

Noriyuki Ushiyama, 51, agreed. "In Japan, the relationship toward the customers is a very delicate one," he said. "For a dress code change to become real, you have to start right there."

Several younger men have shown near panic at the idea of having to improvise a wardrobe beyond a white shirt, dark tie and black suit.

"There is something very convenient about wearing suits," said Naoto Oshima, 33, a systems engineer. "It is very easy to get dressed in the morning. I don't have to worry about what to wear to work at all."

Tomonari Kori, 25, stated flatly: "I wouldn't know what to wear if we had to dress down."

Shinro Hayashi, editor of Men's Club, Japan's oldest men's fashion magazine, traced the salaryman's comfort in the anonymity of a dark suit to a group ethic that dates back to feudal days.

Beyond that, the suit means business. "The suit represents, in a world language, that the guy you are talking to understands the sense of contract, the rules of business," said Mr. Hayashi, who was wearing blue jeans and a white cotton shirt with French cuffs. "Twenty years ago representatives of the Chinese Communist Party never wore suits. Look at them now."

To wean more Japanese men from their suits, the government has asked a famous cartoonist, Kenshi Hirokane, to start dressing his main character, a salaryman, in Cool Biz.

But bracing for diehard sartorial resistance, the government also is preparing to play fashion hardball.

Mr. Okuda of Toyota not only leads Japan's largest company, he is also chairman of the nation's most powerful business group, Keidanren, or the Japan Business Federation. That first Sunday in June, when he walks, or marches, down the catwalk, trailed by 12 lesser executives, it will be national news.

"Mr. Okuda is the top businessman in Japan," Mr. Hayashi said. "If he is really serious about the no-tie movement, the father of the house must demonstrate it himself."

But what happens if the following Monday morning, the business-suited legions march on to Tokyo's trains as if nothing had happened? The next step could be random, unannounced office raids by fashion police.