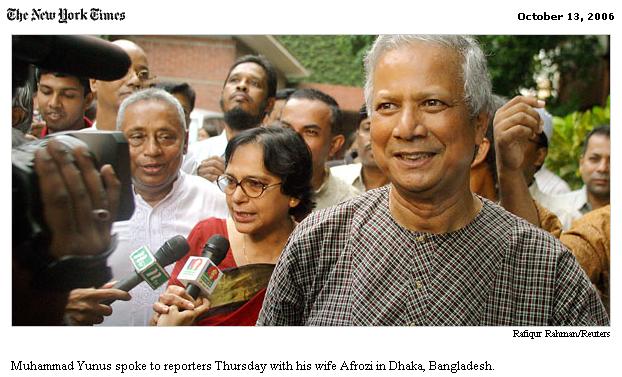 Peace Prize to Pioneer of Loans to Poor No Bank Would Touch
October 14, 2006
By CELIA W. DUGGER

A Bangladeshi economist, Muhammad Yunus, and the bank he founded 30 years ago won the Nobel Peace Prize yesterday for pioneering work in giving tiny loans to millions of poor people no commercial bank would touch — destitute widows and abandoned wives, landless laborers and rickshaw drivers, sweepers and beggars.

The Nobel Committee praised Mr. Yunus, 66, and the Grameen Bank for making microcredit, as the loans are called, a practical solution to combating rural poverty in Bangladesh and inspiring similar schemes across the developing world.

“Microcredit has proved to be an important liberating force in societies where women in particular have to struggle against repressive social and economic conditions,” the committee said in announcing the prize.

Mr. Yunus has long been an influential champion of the idea that even the most impoverished people have the drive and creativity to build small businesses with loans as small as $12, and Grameen Bank has dedicated itself to helping the poorest of the poor.

The borrowers used the money to buy milk-giving cows, or bamboo to craft stools, or yarn to weave into stoles, or incense to sell in stalls, among myriad other money-making schemes.

Reached in Dhaka, Bangladesh, by telephone yesterday, Mr. Yunus recalled the day in 1976 when he reached into his own pocket to give his first loan, $27, to 42 villagers living near Chittagong University where he said he was then teaching “elegant theories of economics.” The borrowers invested the money and repaid him in full, though they had no collateral and signed nothing.

He said he asked himself that day, “If you can make so many people so happy with such a small amount of money, why shouldn't you do more of it?”

Still, over the years, Mr. Yunus faced skeptics and detractors, as it became clear that microcredit loans, alluring as they were, were not by themselves a panacea for poverty.

Some in the microfinance business have questioned the Grameen Bank's focus on serving the poorest, arguing the industry would grow faster and have more impact if it aimed at a wider pool of borrowers, including those struggling just above the poverty line.

Others have sometimes criticized what they see as Grameen's unconventional accounting practices (which Mr. Yunus said yesterday were fully transparent) — or maintained that Grameen should have been more of a leader in combining microcredit with health and education services, or in lending to poor people who need money not to start businesses, but to pay their bills, or cover their children's school fees.

But in interviews yesterday, Mr. Yunus's skeptics and fans alike credited him and Grameen with helping to fundamentally change the way the world saw the potential of poor people and to popularize the movement to provide financial services to the poor.

“Yunus was one of the early visionaries who believed in the idea of poor people as viable, worthy, attractive clients for loans,” said Elizabeth Littlefield, who heads the Consultative Group to Assist the Poor, a research institution supported by microfinance donors. “That simple notion has put in motion a huge range of imitators and innovators who have taken that idea and run with it, improved on it, expanded it.”

Or, as the Nobel committee put it: “Yunus's long-term vision is to eliminate poverty in the world. That vision cannot be realized by means of microcredit alone. But Muhammad Yunus and Grameen Bank have shown that, in the continuing effort to achieve it, microcredit must play a major part.”

The prize was another that fell under a broader definition of peace, awarded by the committee not for traditional conflict resolution, but rather development work, and followed the 2004 award to a Kenyan environmentalist, Wangari Maathai.

Indeed, in the decades since Mr. Yunus's first loan, microcredit has become one of the most popular antipoverty strategies in the world. Last year, more than 100 million people received small loans from more than 3,100 institutions in 130 countries, according to Microcredit Summit, a Washington-based nonprofit advocacy group that Mr. Yunus helped found. The average loan from Grameen Bank was $130.

Over the years, the movement to provide financial services to the poor has become more capacious, stressing the need for services beyond loans — for safe places to save small amounts of money, for crop and life insurance, for inexpensive ways to transfer money earned in distant cities and foreign countries to families back home.

In the 1970's, when Mr. Yunus was getting started, the idea that poor people were a good credit risk seemed far-fetched. The United States Agency for International Development had conducted a global survey of banking services in poor communities and found failure after failure, said Jonathan J. Morduch, an economics professor at New York University who co-wrote a book on microcredits.

Many of the lenders then were state-owned banks that gave credit to politically connected elites rather than the poor people they were supposed to serve. And often at election time, vote-seeking politicians pressed the banks to forgive loans wholesale, leaving the institutions in terrible financial shape.

In 1974, Mr. Yunus, trained as an economist at Vanderbilt University, found himself teaching economics at Chittagong University when Bangladesh was struck by famine. “I decided I must do something,” he said. He began working in nearby villages, among them Jobra, where he made his first loan in 1976.

He said he tried to persuade commercial banks to give loans to poor people who had no assets and had always been dependent on local moneylenders. But the bankers only did so when he personally co-signed as a guarantor.

Mr. Yunus's new model of banking for the poor had several unusual features, Professor Morduch said. Grameen lent to groups of five people, who helped ensure that each member repaid his or her share. It lent not only to farmers, but also to laborers and women who had a knack for crafts and shopkeeping. And it required borrowers to repay their loans in manageable, bite-sized weekly installments.

“He proved the impossible: that the poor were bankable,” Professor Morduch said.

But Mr. Yunus's approach went beyond giving the poor economic opportunity to seeking deeper social change, said Amartya Sen, who, like Mr. Yunus, is a Bengali, an economist and a Nobel prize winner.

Mr. Sen, a professor at Harvard, noted that Grameen's loans had gone overwhelmingly to women, giving financial clout to women who had little power in Bangladeshi society and often lived cloistered in their homes.

In the overwhelmingly Muslim nation of Bangladesh, Mr. Yunus's approach also offered hope and ideas to compete with the allure of fundamentalist Islamic causes.

Those who have watched Mr. Yunus over the years remarked on his gifts as a salesman — his personal warmth, his talent for telling a story, his sheer ability to charm an audience. Those qualities were very much on display last month when he participated in a panel at a Sheraton hotel in New York during Bill Clinton's gathering of international do-gooders.

The theme was “Building a Sustainable Future,” and Mr. Yunus told about how Grameen gave loans to beggars. He made hundreds of rich people — many of them looking for causes to support — laugh out loud and also tugged at their heartstrings.

“All we are doing is telling beggars that, well, since you go house to house begging, would you like to take some merchandise with you, some cookies, some candy, something?” he asked a crowd that hooted with delight at this clever notion.

“A typical loan for a beggar is something like $12,” he said. “With $12, she has a basket of merchandise she carries around and goes house to house.”

“Today, we have more than 80,000 beggars in the program,” he said. “Many of them have already quit begging completely.”

At that, the audience erupted in a sustained burst of applause. Mr. Yunus beamed. 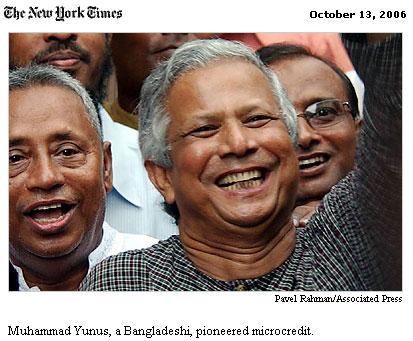