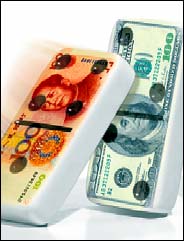 An old Chinese saying holds that the longest journey begins with the first step, but in the case of China's currency policy shift yesterday, the destination of the journey has been left completely unclear and the chosen route has many risks. 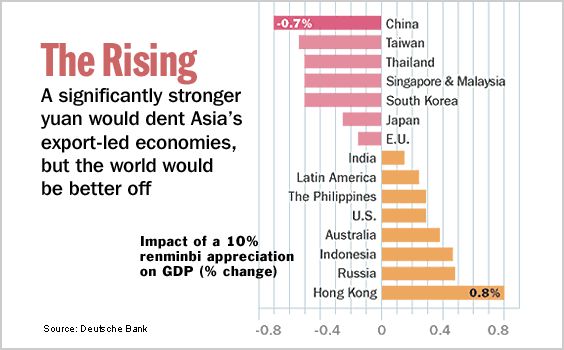 For nearly eight years, Beijing's leaders trusted in Alan Greenspan, assuming that where the dollar went, China could safely follow. Now China's rulers are putting their trust in a much less well-known central banker: Zhou Xiaochuan, the governor of the People's Bank of China, who must manage the more discretionary policy put in place yesterday. Starting with the Asian financial crisis in 1997 and continuing through the rapid economic expansion since then, China has allowed the yuan to vary less than one-hundredth of a percent from its peg of 8.277 to the dollar. That impressive stability helped prompt business executives and entrepreneurs from around the world to invest $60 billion a year in new factories and other operations in China. These investors were confident that they knew what those businesses and their exports would be worth in dollars.

The People's Bank of China raised the value of the yuan by 2 percent on yesterday, to 8.11 to the dollar. But more important, the bank said that each evening, it would set a new trading range for the yuan to move within on the next trading day. To add to the uncertainty, each day's new range may not necessarily be expressed in terms of dollars, the bank warned. It did not provide examples, but the euro would be the most likely alternative.

To determine the new peg, the central bank will look at how a basket of foreign currencies moved the day before. But the central bank did not reveal which currencies it will track or their relative weightings within the basket. This policy gives enormous discretion to China's leaders to push the yuan up or down as they choose.

The only limit that the central bank put on its moves was a promise yesterday that the center of each day's trading range would not move more than 0.3 percent in either direction from the center of the previous day's range. But with 20 or so trading days in a month, that means China could in theory push its currency up by 6 percent a month - or push it down by the same amount. 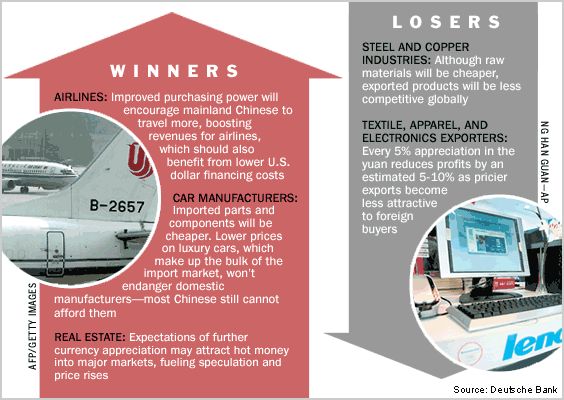 Senior officials in China said in interviews last month that they were seriously considering the adoption of a so-called secret basket of currencies, an approach already followed by Singapore in setting the value of the Singapore dollar. But the officials also acknowledged that the secrecy of this approach carried a serious risk: it leaves China vulnerable to accusations from the United States and other countries that it is manipulating its currency so as to gain an advantage in trade.

The United States Treasury came close in May to labeling China as a currency manipulator and demanded that China allow its currency to appreciate before the next official review in October; countries categorized as manipulators can be subject to trade sanctions.

Economists disagreed yesterday about how much change China would allow over the next few months in the value of its currency. Nicholas R. Lardy, a China expert at the Institute for International Economics in Washington, said that Chinese central bankers had had the legal discretion for years to let the yuan move in a wider range against the dollar, and had chosen not to exercise it.

But Liang Hong, an economist in the Hong Kong office of Goldman Sachs, predicted that China would allow the yuan to rise gradually against the dollar. She compared the new policy to China's currency policy in late 1994, when Beijing first pegged the yuan to the dollar and then allowed it to crawl upward by a small fraction of 1 percent each trading day. This resulted in a total increase of 3 percent in 1994 and smaller increases thereafter.

For American consumers, China's new policy is unlikely to have much effect unless it is followed by much bigger currency moves in the months to come. Chinese exporters making everything from clothing to computers incur much of their costs in dollars, importing essentials like fuel, factory machinery and computer chips.

This will mean that the overall costs of good manufactured by Chinese producers will rise by considerably less than 2 percent, limiting their need to raise prices to American retailers. Moreover, China is strongest in the production of cheap goods like toys and T-shirts for which the wholesale price paid to the factory in China may be only a quarter of the price charged by a store in the United States. The stores charge much higher prices because they pay rents and wages at American levels.

"Prices in our stores are not changing any time soon," Amy Wyatt, a Wal-Mart spokeswoman, said.

Rival exporters in Asia, mostly countries with low-wage work forces like China's, are expecting the yuan's rise to bring them little relief from the relentless expansion of Chinese companies in world markets. "They will not increase their prices unless it really shoots up farther," said Annisul Huq, a textile magnate in Bangladesh.

Executives from more than a dozen Chinese companies said in interviews over the last four months that they expected very little impact on their exports if the yuan rose less than 5 percent, and only a modest effect if it rose by 5 to 10 percent.

A big question mark hanging over China's currency policy shift is not commercial but financial, economists said. If investors decide that China's secret currency policy will result in a stronger yuan, then they are likely to pour even more money into China - a step that could feed inflation in China and make many Chinese long for the days when China still paid more heed to Mr. Greenspan than Mr. Zhou.