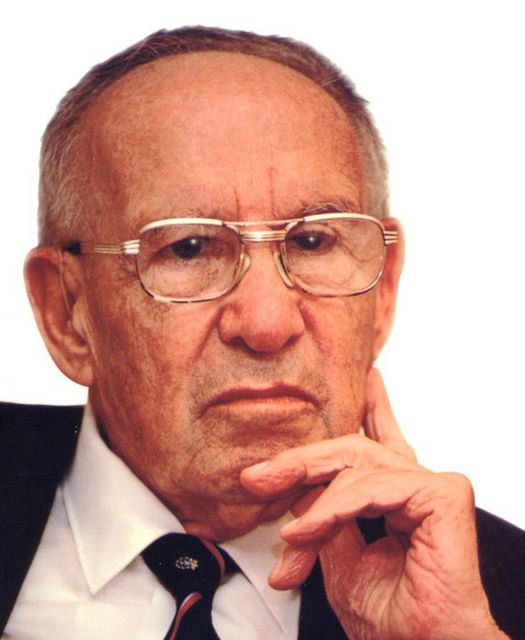 
Peter F. Drucker, a Pioneer in Social and Management Theory, Is Dead at 95

Peter F. Drucker, the political economist and author, whose view that big business and nonprofit enterprises were the defining innovation of the 20th century led him to pioneering social and management theories, died yesterday at his home in Claremont, Calif. He was 95.

His death was announced by Claremont Graduate University.

Mr. Drucker thought of himself, first and foremost, as a writer and teacher, though he eventually settled on the term "social ecologist." He became internationally renowned for urging corporate leaders to agree with subordinates on objectives and goals and then get out of the way of decisions about how to achieve them.

He challenged both business and labor leaders to search for ways to give workers more control over their work environment. He also argued that governments should turn many functions over to private enterprise and urged organizing in teams to exploit the rise of a technology-astute class of "knowledge workers."

Mr. Drucker staunchly defended the need for businesses to be profitable but he preached that employees were a resource, not a cost. His constant focus on the human impact of management decisions did not always appeal to executives, but they could not help noticing how it helped him foresee many major trends in business and politics.

He began talking about such practices in the 1940's and 50's, decades before they became so widespread that they were taken for common sense. Mr. Drucker also foresaw that the 1970's would be a decade of inflation, that Japanese manufacturers would become major competitors for the United States and that union power would decline.

For all his insights, he clearly owed much of his impact to his extraordinary energy and skills as a communicator. But while Mr. Drucker loved dazzling audiences with his wit and wisdom, his goal was not to be known as an oracle. Indeed, after writing a rosy-eyed article shortly before the stock market crash of 1929 in which he outlined why stocks prices would rise, he pledged to himself to stay away from gratuitous predictions. Instead, his views about where the world was headed generally arose out of advocacy for what he saw as moral action.

His first book ("The End of Economic Man," 1939)was intended to strengthen the will of the free world to fight fascism. His later economic and social predictions were intended to encourage businesses and social groups to organize in ways that he felt would promote human dignity and vaccinate society against political and economic chaos.

"He is remarkable for his social imagination, not his futurism," said Jack Beatty in a 1998 review of Mr. Drucker's work "The World According to Peter Drucker."

Mr. Drucker, who was born in Vienna and never completely shed his Austrian accent, worked in Germany as a reporter until Hitler rose to power and then in a London investment firm before emigrating to the United States in 1937. He became an American citizen in 1943.

Recalling the disasters that overran the Europe of his youth and watching the American response left him convinced that good managers were the true heroes of the century.

The world, especially the developed world, had recovered from repeated catastrophe because "ordinary people, people running the everyday concerns of business and institutions, took responsibility and kept on building for tomorrow while around them the world came crashing down," he wrote in 1986 in "The Frontiers of Management."

Mr. Drucker never hesitated to make suggestions he knew would be viewed as radical. He advocated legalization of drugs and stimulating innovation by permitting new ventures to charge the government for the cost of regulations and paperwork. He was not surprised that General Motors for years ignored nearly every recommendation in "The Concept of the Corporation," the book he published in 1946 after an 18-month study of G.M. that its own executives had commissioned.

From his early 20's to his death, Mr. Drucker held various teaching posts, including a 20-year stint at the Stern School of Management at New York University and, since 1971, a chair at the Claremont Graduate School of Management. He also consulted widely, devoting several days a month to such work into his 90's. His clients included G.M., General Electric and Sears, Roebuck but also the Archdiocese of New York and several Protestant churches; government agencies in the United States, Canada and Japan; universities; and entrepreneurs.

For over 50 years, at least half of the consulting work was done free for nonprofits and small businesses. As his career progressed and it became clearer that competitive pressures were keeping businesses from embracing many practices he advocated, like guaranteed wages and lifetime employment for industrial workers, he became increasingly interested in "the social sector," as he called the nonprofit groups.

Mr. Drucker counseled groups like the Girl Scouts to think like businesses even though their bottom line was "changed lives" rather than profits. He warned them that donors would increasingly judge them on results rather than intentions. In 1990, Frances Hesselbein, the former national director of the Girl Scouts, organized a group of admirers to honor him by setting up the Peter F. Drucker Foundation for Nonprofit Management in New York to expose nonprofits to Mr. Drucker's thinking and to new concepts in management.

Mr. Drucker's greatest impact came from his writing. His more than 30 books, which have sold tens of millions of copies in more than 30 languages, came on top of thousands of articles, including a monthly op-ed column in The Wall Street Journal from 1975 to 1995.


Among the sayings of Chairman Peter, as he was sometimes called, were these:

¶"Marketing is a fashionable term. The sales manager becomes a marketing vice president. But a gravedigger is still a gravedigger even when it is called a mortician - only the price of the burial goes up."

¶"One either meets or one works."

¶"The only things that evolve by themselves in an organization are disorder, friction and malperformance."

¶"Stock option plans reward the executive for doing the wrong thing. Instead of asking, 'Are we making the right decision?' he asks, 'How did we close today?' It is encouragement to loot the corporation."

Mr. Drucker's thirst for new experiences never waned. He became so fascinated with Japanese art during his trips to Japan after World War II that he eventually helped write "Adventures of the Brush: Japanese Paintings" (1979), and lectured on Oriental art at Pomona College in Claremont from 1975 to 1985.

Peter Ferdinand Drucker was born Nov. 19, 1909, one of two sons of Caroline and Adolph Drucker, a prominent lawyer and high-ranking civil servant in the Austro-Hungarian government. He left Vienna in 1927 to work for an export firm in Hamburg, Germany, and to study law.

Mr. Drucker then moved to Frankfurt, where he earned a doctorate in international and public law in 1931 from the University of Frankfurt, became a reporter and then senior editor in charge of financial and foreign news at the newspaper General-Anzeiger, and, while substitute teaching at the university, met Doris Schmitz, a 19-year-old student. They became reacquainted after waving madly while passing each other going opposite directions on a London subway escalator in 1933 and were married in 1937.

Mr. Drucker had moved to England to work as a securities analyst and writer after watching the rise of the Nazis with increasing alarm. In England, he took an economics course from John Maynard Keynes in Cambridge, but was put off by how much the talk centered on commodities rather than people.

Mr. Drucker's reputation as a political economist was firmly established with the publication in 1939 of "The End of Economic Man." The New York Times said it brought a "remarkable vision and freshness" to the understanding of fascism. The book's observations, along with those in articles he wrote for Harpers and The New Republic, caught the eye of policy makers in the federal government and at corporations as the country prepared for war, and landed him a job teaching at Sarah Lawrence College in Bronxville, N.Y.

Writing "The Future of Industrial Man," published in 1942 after Mr. Drucker moved to Bennington College in Vermont, convinced him that he needed to understand big organizations from the inside. Rebuffed in his requests to work with several major companies, he was delighted when General Motors called in late 1943 proposing that he study its structure and policies. To avoid having him treated like a management spy, G.M. agreed to let him publish his findings.

Neither G.M. nor Mr. Drucker expected the public to be interested because no one had ever written such a management profile, but "The Concept of the Corporation" became an overnight sensation when it was published in 1946. " 'Concept of the Corporation' is a book about business the way 'Moby Dick' is a book about whaling," said Mr. Beatty, referring to the focus on social issues extending far beyond G.M.'s immediate operating challenges.

In it, Mr. Drucker argued that profitability was crucial to a business's health but more importantly to full employment. Management could achieve sustainable profits only by treating employees like valuable resources. That, he argued, required decentralizing the power to make decisions, including giving hourly workers more control over factory life, and guaranteed wages.

In the 1950's, Mr. Drucker began proclaiming that democratic governments had become too big to function effectively. This, he said, was a threat to the freedom of their citizens and to their economic well-being.

Unlike many conservative thinkers, Mr. Drucker wanted to keep government regulation over areas like food and drugs and finance. Indeed, he argued that the rise of global businesses required stronger governments and stronger social institutions, including more powerful unions, to keep them from forgetting social interests.

According to Claremont Graduate University, Mr. Drucker's survivors include his wife, Doris, an inventor and physicist; his children, Audrey Drucker of Puyallup, Wash., Cecily Drucker of San Francisco, Joan Weinstein of Chicago, and Vincent Drucker of San Rafael, Calif.; and six grandchildren.

Early last year, in an interview with Forbes magazine, Mr. Drucker was asked if there was anything in his long career that he wished he had done but had not been able to do.

"Yes, quite a few things," he said. "There are many books I could have written that are better than the ones I actually wrote. My best book would have been "Managing Ignorance," and I'm very sorry I didn't write it."