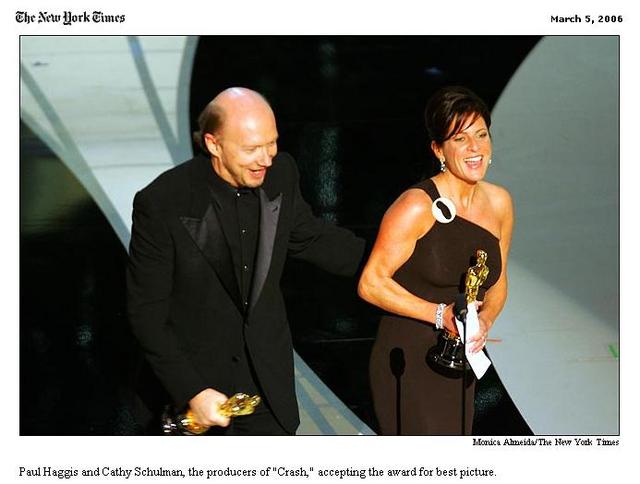 March 6, 2006
'Crash' Walks Away With the Top Prize at the Oscars
By DAVID M. HALBFINGER and DAVID CARR

LOS ANGELES, March 5 — In a stunning twist, the motion picture academy turned its back on "Brokeback Mountain" and its unflinching gay love story Sunday night, awarding the Oscar for best picture to "Crash," a moody kaleidoscope of racial confrontation in Los Angeles in which every character is at once sympathetic and repulsive.

"Brokeback Mountain," which had taken nearly every major best-picture prize in the run-up to the Oscars, won the awards for its director, Ang Lee, and for best score and adapted screenplay. "I wish I could quit you," Mr. Lee joked in accepting his award, echoing the film's best-known line.

But it was Paul Haggis's "Crash," which opened to decidedly mixed reviews but was a sleeper hit last summer, that proved a hometown favorite among the Angelenos who make up the vast majority of academy voters. They no doubt approved of its depiction of blacks, whites, Latinos and Iranians venting at one another, and perhaps, too, of its racial humor in service of a more serious point about intolerance and preconceptions.

"Crash" also won the Oscars for best original screenplay, for its writers, Paul Haggis and Bobby Moresco, and for the film's editor, Hughes Winborne.

The upset victory for "Crash" came on a night when the academy honored some of Hollywood's favorite performers, as Philip Seymour Hoffman was named best actor for inhabiting the role of Truman Capote and Reese Witherspoon won best actress for her steely, charming turn as June Carter Cash in "Walk the Line."

The 78th Academy Awards, like the year in film, seemed preoccupied with political and moral subjects. George Clooney won the best supporting actor award for his performance in "Syriana" as a C.I.A. agent caught between terrorists and his corrupt bosses.

And Rachel Weisz was named best supporting actress for her performance in "The Constant Gardener" as a muckracking activist in Kenya whose victimization by an evil pharmaceutical company rouses her emotionally deadened diplomat husband into action.

Mr. Clooney, who acknowledged that politically "we are a little bit out of touch in Hollywood," said that once in a while that was "probably a good thing." And he returned the academy's compliment.

Moments later, Mr. Clooney mused that Hollywood was, about two years late, getting around to wrestling with the social and political issues confronting the nation. "It won't last very long, but we've done this on and off," he said. "We did it in the 30's, we did it in the 50's, we certainly did it in the 60's and 70's and we'll probably continue to do that, which is reflect society, not truly lead it."

Mr. Hoffman, accepting his Oscar, congratulated his mother. "We are at the party, Ma," he said. A radiant Ms. Witherspoon thanked her parents, too. "It didn't matter if I was making a bed or making a movie, they never hesitated to tell me how proud they were of me," she said.

A departure to the serious themes was the winner for best documentary feature: "March of the Penguins." The surprise hit bested a field that included documentaries on the scandal at Enron and on a hard-fought mayoral election in Newark.

With the comic Jon Stewart of "The Daily Show" as its host, this Oscars telecast was bound to scald a little, and Mr. Stewart had what were no doubt welcome barbs for Republicans, perhaps less welcome ones for Democrats, and plenty at the movie industry's expense.

He said that the singer Bjork could not attend: "She was trying on her Oscar dress, and Dick Cheney shot her." He suggested that casting their academy ballots may well have been "the first time many of you have ever voted for a winner."

And, in introducing Terrence Howard, who played a pimp who aspired to be a rapper in "Hustle & Flow," Mr. Stewart defined a pimp as "an agent with a better hat." In fact, it was the rap song of Mr. Howard's character, "It's Hard Out Here for a Pimp," by the heretofore unknown Memphis group Three 6 Mafia, that won the Oscar for best original song, immediately after the group gave a raucous performance of it.

Mr. Stewart's narrow and young viewership on the cable network Comedy Central made him relatively unknown to the worldwide Oscars television audience, but his court jester's combination of sarcasm and flattery seemed to work with the Hollywood royalty in the room.

He said Mr. Clooney's "Good Night, and Good Luck" was not just a movie but "how Mr. Clooney ends all his dates." He assured Steven Spielberg that after "Schindler's List" and "Munich," "I think I speak for all Jews when I say, I can't wait to see what happens to us next."

On a night in which the expectations were high for "Brokeback Mountain," Mr. Stewart saved his best prerecorded material for what he called "the elephant in the room." With faux indignation, he said that "Brokeback" had "tarnished" the image of the staunchly heterosexual American western.

What followed was a montage that illustrated the kind of homoeroticism that has pervaded Westerns, and for that matter a half-century's worth of buddy movies and all kinds of mainstream literature at least as far back as Huck and Jim: Cowboys, sheriffs, and ranch hands stripping down to their union suits, admiring and handling one another's guns, winking, sweating, bunking down for the night, and asking, "Mind if I look at your Winchester?"

The award for best foreign language film went to "Tsotsi," from South Africa, Gavin Hood's story of crime and redemption set against a Johannesburg shantytown.

The director Robert Altman, whose films include "Nashville" and "The Player," the latter a classic take on the movie business, was given an honorary award for lifetime achievement. He revealed that he had received a heart from a 30-year-old woman 10 years ago — and kept it a secret until now for fear of the stigma that comes with it. "I think I've got about 40 years left in it," he said, "and I plan on using it."

While 2005's movie calendar was short on polarizing events — no one tackled the Passion or excoriated the Bush administration the way Mel Gibson and Michael Moore had the year before — it was teeming with modest movies making small statements about Important Subjects.

The nominees for best picture, all but one of them from studio specialty divisions, alone bore evidence of Hollywood's sudden case of seriousness: "Capote" and "Good Night, and Good Luck" cast a critical eye on the roles and responsibilities of journalists, "Crash" explored racial animosity and challenged preconceptions, "Munich" took on Middle East violence, and "Brokeback Mountain" illustrated the point-blank impact of intolerance. The lone big-studio picture, "Munich," was made for some $75 million, more than twice the combined budgets of all four other nominees.

The messages here were seldom radical, the causes rarely unpopular: Niki Caro's "North Country" tackled the evils of sexual harassment, and the point of "Munich" seemed to be little more than the schoolyard lesson that violence solves nothing.

By and large, it was a wretched year for Hollywood's major studios, with a steady stream of action movies and comedies performing belly flops into empty pools.

The Oscar for best animated feature went to "Wallace & Gromit in the Curse of the Were-Rabbit," over "Tim Burton's Corpse Bride" and "Howl's Moving Castle."

In a fairly tame race, about the only thing interrupting the tedium of "for your consideration" ads and breaking the monotony of acclaim for "Brokeback" — with the exception of the critic Roger Ebert's ardent agitating on behalf of "Crash" — was an acrimonious lawsuit between two "Crash" producers, Bob Yari and Cathy Schulman.

Mr. Yari, who put together the $7 million budget for "Crash," was barred by academy rules from joining Ms. Schulman and two other credited producers onstage — and in fact watched from home. Perhaps brimming over with generosity, Ms. Schulman, in the end, did mention Mr. Yari's name.

The red carpet offered the usual weave of glamour, fashion and Hollywood striving. Stars who usually move in their own little orbits stood shoulder to shoulder, some hugging, some checking the others with sidelong glances. It can get pretty thick at times, and did. When Mr. Clooney, a nominee in the director, supporting actor and screenwriting categories, reached over to shake the hand of Heath Ledger, a best actor nominee, he did so across Michelle Williams, who had her own nomination as best supporting actress.

It has been a long season of precursor awards — the Golden Globes, the Screen Actors Guild, the Independent Spirit awards — and not everyone will miss the ritual. Paul Giamatti, up for best supporting actor, surveyed the phalanx of reporters confronting him and said, "I'm thinking about putting up a hedge in my house and having a bunch of guys come over to my house and stand behind it just so I don't get lucky." Some, like Mr. Hoffman, skipped the chain gang of press, while others embraced the opportunity.

Juicy J, Jordan Houston, a member of the Three 6 Mafia and one of the co-authors of "It's Hard Out Here for a Pimp," stepped up to the Oscars with not one, but two diamond encrusted watches, topped off by a set of diamond "grills," two rows of jewels that he wore over his teeth.

Ludracris, the rapper-turned-actor who has a role in "Crash" and introduced the performance of Three 6 Mafia, said that Hollywood should get used to it.

"I'm proud to be part of history, the first time hip-hop is performed at the Oscars," he said on the red carpet. Asked whether he was worried how the audience might respond, he said: "I think they will go out an buy the record. It's about time for this kind of music to start showing up."

denotes the winning nominee in each category.

ACTOR IN A LEADING ROLE

ACTRESS IN A LEADING ROLE

ACTOR IN A SUPPORTING ROLE

ACTRESS IN A SUPPORTING ROLE

Howard Berger and Tami Lane, "The Chronicles of Narnia: The Lion, the Witch and the Wardrobe"
David Leroy and Lance Anderson, "Cinderella Man"
Dave Elsey and Annette Miles, "Star Wars: Episode III - Revenge of the Sith"

"March of the Penguins"
"Darwin's Nightmare"
"Enron: The Smartest Guys in the Room"
"Murderball"
"Street Fight"

"The Moon and the Son: An Imagined Conversation"
"The Mysterious Geographic Explorations of Jasper Morello"
"9"
"One Man Band"

"A Note of Triumph: The Golden Age of Norman Corwin"
"The Death of Kevin Carter: Casualty of the Bang Bang Club"
"God Sleeps in Rwanda"
"The Mushroom Club"